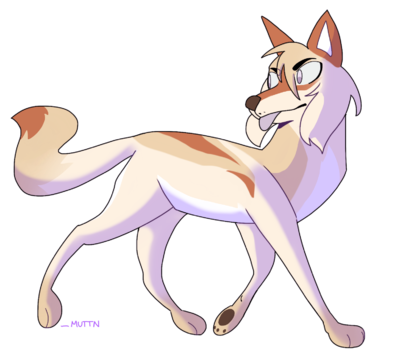 Bridget is golden and middling large in size. She has copper markings across her face, back and tail, and her eyes are a light lavender hue. Her fur is long and often tousled.

She is a friendly and outgoing wolf who holds very little awkwardness. She is self-assured and generally can be found with a grin on her face and something to say. Despite being welcoming to new and old alike, she is prone to snap judgements and overprotective measures. She is also quick to become frustrated when she loses or is proven wrong. Luckily she is the type to (typically) get over her anger quickly, and her moods come and go with the wind.

None of importance currently

Bridget was born into the Faerie Court. She was a troublemaker from the start and enjoyed, most of all, poking fun at the "stuffy" elders. Her antics often got her into trouble (both dangerous and disciplinary) and, generally, she was assigned to help the pack healer as punishment. Despite the nature of her assignment, Bridget began to find herself enjoying learning the art. Eventually she became an unofficial 'apprentice' to Leticia, who seemed to also appreciate her help outside of her usual well-meaning insults.

When the Court became too overpopulated and a number of members were forced to leave, Bridget volunteered to go with. She had few ties to the pack outside of her parents and had always wanted to see the wider world. Her request was (eagerly) granted, so she packed up and left home, making her way to Teekon in Lumiya's pawsteps.

When she first arrived, Bridget made a point to travel some. She met Orlaith relatively quickly, however, and pointed her nose towards the Seelie Court shortly after. She liked the familiar feel but younger vibe and joined on eagerly as the new pack's healer. While there she met few of her packmates extremely well, but she did form a quick bond with Teya. She also enjoyed Izumi's company (though the woman was a tad harder to read).

When she was not gathering supplies or hunting, Bridget tended to wander. On one such trip she stumbled upon the forming Raven's Watch pack unbeknownst. Solpallur took issue with her presence and attacked her. The situation quickly escalated despite Stjornuati's attempts to mitigate it, and Bridget left with a heavy grudge towards the two brothers.

A short time later, the court disbanded due to members departing. Bridget set out with Teya and Sundance to try and find a new home, but Teya was lost along the way. Bridget continued to search, eventually tracking her location down to (of course) Raven's Watch. She went and retrieved Sundance, then came back and together they escorted Teya to the pack that he had found; a new founding location known as Brecheliant.

Bridget settled quickly into life in Brecheliant. She grew closer to Teya, even drifting towards the realm of something more, but otherwise slipped happily into the background of pack life, refusing to put herself up for the role of Raven, even when asked. She had no desire to assume leadership of any sort.

When tradgedy struck in the rapid loss of a few important members of the pack, Bridget took it upon herself to perform the rites that would carry them on. Though dwindled, the pack continued, and she attempted to remain a steadfast presence in the midst of so much turmoil. It was shortly after all of this that she stumbled upon an injured Towhee, however, and in nursing her back to health formed a fast friendship with the Redhawk.