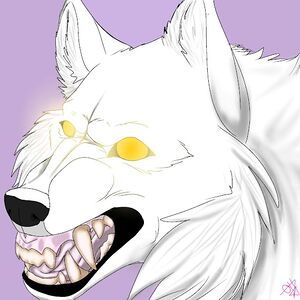 Name: Nyra Nightwish
Age: 4 (March 5th, 2017)
Sex: Female
Height: 36" at the shoulder
Alignment: Chaotic
Pack: Blackwater
Rank: Acolyte
Personality: Nyra is not a truly benevolent wolf. She can do good things, but at the end of the day, she is only "good" if she feels like it. Unpredictable, Nyra's good deeds are at risk of being swiftly followed by violence and malice, or visa versa. Nyra is also an unfortunate owner to an unstable sense of right and wrong, perhaps even a twisted sense of good. Once summarized as timid and cooperative, Nyra is now a frenzied hellfire, radiating overpowering waves of sinister power. She is indomitable, bullheaded, murderous, cruel, bloodthirsty, and fiery. Although loyal to herself and her pack before all else, Nyra is a ticking time bomb of violence, a razor-sharp weapon forged from the ashes of a cruel past and intense combat training. Nyra's trust and loyalty is not easy to gain yet is easy to lose if she doesn't value you. After the fall of the Saints, Nyra is no longer as reckless as she was before, instead becoming more patient and calculative.