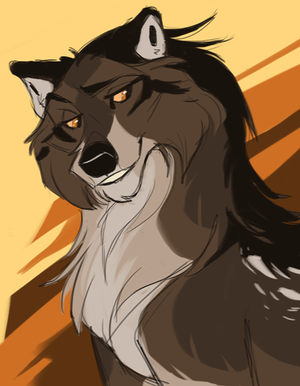 An assortment of browns lightening to tan as they cascade down. Colt boasted a pair of molten bourbon eyes and the famous Blackthorn stripe extending down his spine.

Colt was suave and somewhat egotistical, especially when he was young. He was constantly aware of his best points and used that knowledge shamelessly. He enjoyed pushing boundaries but knew when to shut up (most of the time).

As he grew older Colt tempered somewhat, gaining more tact but losing none of his charm. He still tended towards reckless over cautions, but he learned to take and give advice when needed.

A literal shit-ton. I kid you not.

Finley Blackthorn is probably the only one that really matters.

She and her 50 bajillion crotch goblins <3

Growing up among the Blackthorns, Colt's favorite and first partner in crime was always his sister Finley. The two ran his parents ragged, and usually were joined by his best friend Hawkin. When they finally made to set out, the three did so together, just like they did everything.

Colt knew his friend had a crush on his sister, and he thought the two of them would be kinda rad together. Why shouldn't they? Hawkin had some issues, but he was a good guy. When Finley rebuked him, andHawkin took his own life shortly after, Colt unfairly blamed his sister as a result. He confronted her about it and they split ways.

Losing both his best friends like that sent Colt into a self destructive spiral. He passed the next few years in a series of one night stands and pissing contests, always only staying in a pack long enough to mouth off and get chased from their ranks. He fathered a few illegitimate children towards the end of it, but never learned their names, nor remembered the names of their mothers. He couldn't be bothered to care.

It seemed like that was all his life was meant to be until he met Nell. She latched onto him as a friend and, for the first time, someone refused to put up with his bullshit. Somehow she saw the wolf underneath and, by her persistence, they formed a close relationship that soon turned more than friends. They settled apart for the summer, but intended to look for a pack of their own once winter began settling in.

Instead, Nell took ill with paralytic rabies shortly after they made their home. Colt was helpless to do more than watch as she slowly lost the ability to function and then wasted away, passing days later. Grieving, Colt nearly sank once more into former habits, but instead, his thoughts turned to his sister. It was time for him to find his family again.

It took Colt a bit, but after running across Quixote and then Elwood, Colt decided to join Redhawk Caldera and attempt to mend things with Finley. They sorted it out rather fast and he settled into the pack just in time for their war with Blackfeather Woods. Colt fought for them and they managed to route the other pack for a time. A fond encounter with Relmyna made his feelings on the matter conflicted but he was too new to know much about the situation anyway.

Then the enemy pack returned and, at Towhee's insistence, the pack relocated.

The caldera pack moved to Heron Lake Plateau and took the moniker Redhawks. Screech, Towhee's brother, had hoped to claim the place, and while Colt empathized with him, his biggest hope was to settle without conflict. Towhee's management of this situation was the first fuel on the fire that would ignite dislike between them. Her deafness and her use of a bird as assistance bothered him immensely, as did her insistence to fight unnecessary battles.

In the end, the two packs merged and made a new home. Towhee became Alpha, a role change that Colt immediately hated. After discussing his doubts with Quixote and Elwood, Colt wasn't satisfied with leaving things as they were. He snuck up on Towhee in an attempt to make a point of her inadequacy to lead, but it backfired. She kicked him out of the pack.

His friend Quixote hooked up with Raven and, after a series of events Colt neither knew nor understood, suddenly they were the alpha pair and Towhee was back to Beta. Qui wasted no time in welcoming Colt back into the pack on the promise that he'd attempt to mend things with Towhee. His attempts did not go well, and on the brink of giving up, he approached Raven for advice. She began teaching him Ptero and he continued to learn from her, picking up the language at least in part.

Colt struck up a friendship with Niamh as well, checking in on her after an accident with Screech had her watching over her comatose friend. His worry culminated when Screech attacked Raven and was cast out; Niamh seemed shell shocked. He allowed her to stay with him rather than return to where she'd been caring for Screech.

Colt began to catch feelings for Niamh bigtime, but his doubt that he was over Nell made him hesitate. He tried talking to Quixote about everything, but it ended up going south somewhat, with Colt realizing it was a decision he'd need to make himself. Finally, he committed, though they did not label it immediately.

Eventually Colt took Niamh to his and Nell's old home and spilled everything. He felt he needed to, had to let her know, before he truly moved on and opened up to her. Soon after, even with his sister Ceara's disappearance weighing on his mind, he asked Niamh to take his name. She agreed and the two became mates.

They had a minor spat when Colt was bluntly honest about Raven's recent absence, but that was quickly resolved. A bigger fight happened when a Blackfeather wolf, Maegi, showed up with news of Ceara. In order to hear what she had to say, Colt intercepted Towhee's attempt to kill the girl outright. The Beta was knocked unconscious and Niamh told him to either kill the girl or never come back. Colt, furious that his mate would back her friend over him (especially in something so important as his sister), left with no intentions to return. She caught up with him after he found Ceara, but they were unable to patch things up. He left the pack, but in telling Finley of his intentions, learned of a new place to go.

Colt joined and took up residence with the Firebirds under the leadership of Wildfire. A ways into his membership, he crossed paths with Niamh once more. She begged him for a second change and he acquiesced, but only if she left the Redhawks and came to live with him instead. She agreed, came, and they slowly began to mend their relationship.

It went well. So well, in fact, that Colt ended up approaching Wildfire and asking about kids. She refused on the grounds of not knowing them well enough. After asking Finley and Elwood advice, Colt worked at it alongside his mate, eventually turning that 'no' into a 'yes'. He and Niamh had two children - Bronco and Nellie.

Colt was a doting father, but when Wildfire fell sick and passed, he stepped up as Sovereign. Juggling a full pack was hard, but he managed it, until the day Wildfire's daughter Kiwi returned. He met her at the borders and delivered the news about her mother, but she attacked him, claiming that he had murdered her mother for her position. Colt won the fight, but his wounds were heavy.

Despite attention from Sugar Glider and Eljay Jr., Colt grew sick. He died of sepsis only a short time after.