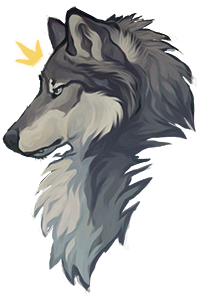 A large grey wolf with dark stippling and a somber appearance. His silver eyes are framed with dark markings and his fur is long and shaggy.

Dante was a rather no-nonsense wolf who dealt little with superstition. He held himself and others to high standards and could sometimes be rather harsh in judgements. He tended towards pessimism, but with Osprey, learned a little of how to be whimsical.

For the most part he was a friendly and steadfast wolf. He was not quick to anger and had patience that lent itself well to his counselor trade. He was not great at showing enthusiastic affection but he loved his friends and packmates well.

Dante was the firstborn son of Atrix Cor Obscuri, Commander of the Caligae pack. His parents' union was arranged; his mother Kira was chosen for her promise in providing heirs worthy of taking Atrix's place when he inevitably fell. Tarin and Daes were both born alongside, but from the outset, it was clear that Dante was his father's favored heir. He also had an older sibling who he did not find out about until later - Melusina. She and her mother resented Kira and her children, believing that Melusina's claim was better. Women did not tend to hold the title Commander, so Atrix refused to acknowledge her place in the lineage.

The Caligae were a vicious band. The story was that, long ago, they were an escaped faction of a larger warband. Liberated by Dante's great great grandfather, they traveled south, razing every pack they came across who was not strong enough to deter them. It was their mantra that the strongest deserved to survive and that those weaker only used resources they could not earn. Few of the pack lived past their prime, and those that lived to become infirm were seen as dishonored. True honor was found falling in battle.

Dante grew quickly, and while he had a good relationship with his brother, he was particularly fond of his sister Tarin. While they began their training, it became clear quickly that she did not have a taste for violence. Dante and Daes both excelled, but she refused to fight, and very soon she was cast to the lowest rung of the pack. Training when they were pups was simple fights, but as they grew older, the fights became more and more ruthless. Finally, after finishing a bout when he was a few months old, Atrix ordered him to finish his opponent. "Honor his defeat". The other combatant was one of Dante's best friends, but he couldn't refuse. This act would go on to haunt him, even into his older adult life.

Shortly before their training was complete, Tarin was finally chased from the pack. Dante, tired of the bloodshed and unwilling to let her go alone, followed. If found, both would be killed on sight as traitors to their blood. They barely escaped intact.

Eventually, after traveling together a ways, they came across a pack. Tarin was enamored with the place and fell in love soon after. Dante was unhappy there, butting heads with the leader regularly, and so they parted ways. She was in good hands with her mate and happy.

It was during his travels after, alone, that he met with Helena. The two became fast friends and travel partners, and together the two found their way into Teekon Wilds.

Shortly after arriving, Helena disappeared. Dante met Peregrine and the two hit it off, so Dante sought membership in Blacktail Deer Plateau. He formed close bonds with Blue Willow and Lasher quickly. The pack became more of a family to him than any he had ever been a part of before. Over a series of events that included Atticus, Peregrine's brother, being injured, Dante was elevated to Beta male. Despite being uncomfortable with the idea of promotion over his close friend (and Peregrine's lover)) Lasher, Dante accepted.

He held that rank until Lasher, Fox, and Peregrine one day decided to go scouting. Fox injured herself and Peregrine returned to announce that they were moving, splitting from the pack to live where she had remained to recover with Lasher. Suddenly, Dante and Blue Willow were required to sort out the future of the pack themselves. Peregrine then rushed off, leaving a furious Dante and taking a few members with him. After discussions and weighing the options, a reluctant Dante once again accepted more responsibility and took up the Alpha rank.

After a turbulent first tenure, Dante decided for the good of the pack to turn down Peregrine's offer that the Plateau and the newly formed Redhawk Caldera be sister packs. This essentially ended his friendship with the man. The rocky nature of their packs continued for a while, intensified by the extremes of Osprey Jr. and her reactions to her father's abandonment. Some good was to be had, however - Lasher had returned to them soon after Peregrine's departure, and he and Blue Willow were granted permission to have children of their own. Saena stepped up in the pack and Osprey, after disappearing for at time, rejoined them once more.

Through the process, Peregrine learned of Osprey Jr.'s actions and he and Dante mended things. Then the season came and Dante, unaware of his burgeoning feelings for Osprey, failed to attempt to receive her advances. She instead became pregnant with a stranger's pups, an occurrence that Dante took immensely hard. They eventually resolved things, and Osprey took to sleeping in his den.

The same day that Osprey had her pups, Dante confronted Koda about disrespecting Blue Willow. They fought and Dante lost, another blow to his pride. Fortunately, the man did not attempt to take the throne, choosing to leave the pack instead. Dante struggled with this until Lasher, Blue Willow, and Osprey reminded him that the pack chose to follow him.

Things passed relatively quietly until news was received that Osprey Jr. was missing and that Saena, seeking news of her, was attacked by Fox at Redhawk Caldera. Though the girl had already left to start Redtail Rise, Dante and Lasher still were angry on her behalf and wondered what it meant for their own pack. Then, quiet continued.

Abruptly, the peace was broken when a small fire broke out in the Plateau's forest. Most of the pack made it through unharmed, but Dante was brokenhearted when Osprey was among those missing. He searched for her a long while in the choking smoke, but eventually was forced to give her up as lost. Unable to manage the overwhelming loss, he left the pack lands, taking a trip towards where he'd parted with his sister so long ago. Before he could even reach, however, he received word of her. A messenger delivered the news that she and his nieces and nephews had all been slain, lost to the hand of his half-sister and brother. It was a forewarning - he knew what it meant. Atrix had set up his conditions for their claim and they were taking it, hunting down the traitors who had left. He would be next if they found him.

So Dante returned. The Plateau decided to do war with the Caldera if necessary after finding out about Peregrine's actions against his former children, and Dante continued to lead, paranoid of their borders. His anger eventually led him to conflict with Charon over the pain of Osprey and the boy's callous words. Dante lost control and both ended the fight maimed. As the Plateau progressed, the three leaders began to speak of relocation. A search for suitable territories commenced, and Dante expressed his preference that Lasher take the lead in their new home. The man accepted, naming Dante his Beta once that time came.

They found the Sentinels, and just before moving, Osprey returned to them.

The move happened smoothly and together they staked a new claim in the Sentinels - Donnelaith. Lasher took the lead alongside Blue Willow and Dante stepped into his new role as Beta. Even more surprising, after their move, Osprey asked Dante to become her mate. He agreed and after a long, long time of dancing around the subject, they finally became a pair.

After Blue Willow and Lasher welcome a second set of children, Dante and Osprey decide to try having some of their own. Dante is still guilty over the ones she had stillborn, wondering if he could have saved them had he not been so stubborn about keeping his distance and closing her out. But he is excited to be a father and to give her a second chance at a family.

A band of wolves began to make trouble for Donnelaith, raiding their borders and attacking their members. Lasher chose to go alone to make an alliance with a pack on the coast and a woman he had confidence with - Caiaphas. This drove a wedge in his relationship with Dante for a time, who was angry he seemingly didn't care the danger he put himself in.

The situation eventually resolved and Dante got past his anger. Osprey's pregnancy advanced and locusts descended on the wilds, taking all of the greenery and much of the prey with them. Terance, Sagittaria, and Wraen were born just in time for a famine, but they were well loved from the start.

The famine made life harder, and exhaustion hit the pack from all sides. Finally it took Lasher, a heavy loss for all of Donnelaith, and Dante no less. Blue Willow had already disappeared previously, meaning that little of the original Plateau pack remained. With Osprey's declining health and the lack of food, the pair made the decision together to move their family south. There they could start a place of their own in a kinder climate to them both. Dante too weathered the cold badly ever since his actions in the fire.

Dante and Osprey found a suitable location in a southern forest and together built a thriving pack. Helena joined them, to her old friend's delight, as did a variety of new faces. A year in, Osprey had another litter; Maia, Cassandra, and Coriander.

Dante worried about Osprey's failing health and depression, so his time was often split between time with her and watching the pack. Sarah stepped into the role of alpha. Her brother Terance left for the wilds and presumably created his own pack. Dante couldn't have been prouder. Wraen and Maia followed consecutively, each in their own time, and while he worried he was glad to know his children had each other out in the world.

Before Maia's departure, three more children were born - Jupiter, Junona, and Janus. After this, Osprey's health took a sharp nose dive, requiring more and more that Sarah lead the pack. Fortunately Cori showed a knack for leadership as well. When fires began to occur, the prospect of moving was discussed, but Osprey would likely not survive the move. They remained and, that fall, disaster struck.

A larger fire than any before took the pack lands. All of their packmates escaped, including their newest children, but Osprey was unable to flee the flames. Dante refused to flee without her and together they perished in the smoke in November of 2018.