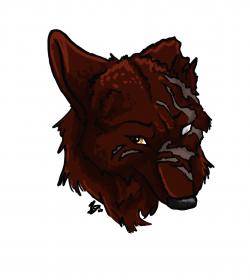 Average sized and russet brown. Her coat is for the most part unbroken but fades to darker in areas. Her eyes are a shrewd gold. She was vain in her youth. The immense scarring on her face, sides, and haunches over the years has tempered that some. She is also missing a large portion of her left ear and her left eye is clouded and sightless.

Rosalyn is unapologetic and uncompromising. She holds her opinions fast and has a hard time swaying in them. She's an accomplished ambassador and charismatic when need be, but she sees little point in connections that hold no benefit to her. Her list of friends is extremely small.

She has no desire to bring harm to others, but if she herself or someone she loves is harmed, she will not hesitate. Nor will she hesitate if the gain is worth the cost. She will step on another if it means her own will have a better chance to get ahead.

Rosalyn was born to a single mother on the far southern shore. Her father was a drifter whose name she never learned and who left before her mother even knew she was pregnant. She had no littermates.

The ocean was a major resource for their pack and a staple in her life ever since she can remember. Her mother was always inattentive, so she turned to the waves often for games and comfort as a child.

Relative happiness lasted a while, but life on the coast wasn't easy. Pirates came and, in exchange for their pack's safety, Rosalyn was made a gift to their captain. She became a wench of the crew.

Her inability to keep her head down earned her the scorn of the other women and the attention of the men. When they were violent she would fight and, occasionally, she would win. Eventually she found mentors, women who showed her how to prevent children and how to deceive. It was a miserable cycle, but a crucible.

It reached a breaking point when finally, one night, the Captain pushed her too far. She killed him, and in the chaos that followed the women rose up. Those men who acquiesced were allowed to remain, the rest chased out or killed. Fortunately the favor of the women carried more pull than expected. Even for pride, many of the crew were loathe to lose it. Rosalyn assumed command as her closest mentor and love, Sarai, became her second.

Rosalyn was still young and had no idea that she was being used; not until Sarai betrayed her. Shortly after her rise to Captain, her second cast her from the cliffs into the ocean.

She was lucky to survive and when she emerged, shattered by heartbreak and rage, she had no desire to return.

Upon her arrival to Teekon, Rosalyn took up wandering as a loner. She signed to no packs right off, instead forming a casual friendship with Pantaleimon (aka "Kitten") and a casual friendship with benefits with Fox Redhawk (who she knew only a "Red"). She aided the former in returning home to Redhawk Caldera when they were sick, and then again assisted Finley Blackthorn by carrying news of her situation to the same pack.

A few month in, she was approached by a large man who spoke of a pack forming in order to survive the coming cold. His name was Vlad and the pack was Saltwinter. Rosalyn agreed to join, but she'd formed the opinion that any crew she joined she'd lead. She showed little respect for the self-made queen Caiaphas, forming a tense rivalry that edged, but never broached, enemies.

Vlad became a close friend and confidant, nursing her back to health after an encounter with Shardul and constantly dubbing her "Mees Stendards". Eventually, however, her conflict with Caiaphas came to a head. The woman ordered Vlad, at this point her second, to kill Rosalyn. Instead the two turned on her, but she and her followers matched them. They were chased from the Sound.

Separated from Vlad post-exile, Rosalyn fled south to avoid the famine. She remained there a while, but found nothing, so eventually wound her way north once more. This time she came across Thuringwethil who accepted her into the ranks of Sleeping Dragon.

The pack held a familiar face in Wildfire, but it was an ill-fitting choice from the start. Trades were required and the pack was rigidly structured, a concept that the pirate was not suited to. She remained until she recovered her strength and felt she had done her part; then, with word to Thuringwethil, she departed.

This time while away, Rosalyn sought to connect with Vlad once more, but she could not track him down. On her return she chose to remain near the coast, encountering Smokestep and his band with their hopes to build a crew. She fell in with Ironsea much easier than any before; her time with pirates had not been the best of her life, but the lifestyle was comfortingly familiar, and this was a better variety than most.

Early on, Rosalyn entered a rivalry with Smokestep's sister, Sandpiper. When the time to form came, she challenged her for First Mate and claimed the title. Smokestep, though furious, was forced to acknowledge the victory.

Ironsea became Rosalyn's first true home. Here she formed fast friendships with Raptor, Daikini, and many others. Here was also where she first met Erzulie. The two began casually but quickly ignited into something more, something they did not label just yet.

On a scouting expedition to track down deserters, Rosalyn ran into Towhee, and the pair ran afoul of a lynx. She was forced to recover with the Redhawks pack until she was well enough to travel. When she left, she did so with a thank you, but without a formal farewell. This seemed to leave bad blood between them.

On her arrival, she learned that Sandpiper had gone missing and that Smokestep was leaving to search for her. Rosalyn was furious that he would abandon the pack, but stepped up as Captain in his stead. She held it together a while, but when the bear Shardik came, they did not have the numbers to expell him. She and Erzulie fought so that the others might escape, but Ironsea was scattered to the winds.

The loss of Ironsea shook Rosalyn as few things had before. She and Erzulie wandered, the latter severely injured, and sought a harbor to rest in. They were rejected from Drageda, the first pack they crossed, likely for the best due to Rosalyn's past dealings with Thuringwethil. Their relationship had soured during her time with Ironsea. They could not go to Redhawks either after an encounter with Niamh Blackthorn made it clear they would not be welcome.

They found safety in an unlikely place - with Caiaphas in the newly forming Rusalka. She was not thrilled, but deperation and fear for Erzulie persuaded Rosalyn to accept her old rival's aid. As the pack formed, tensions rose with the neighboring Drageda. Before the claim had even been made, Thuringwethil attacked Rosalyn on the borders and managed to take her captive.

She was held and starved for a month within the cliffs of Drageda. Eventually the Sound launched a rescue attempt, but the try was unsuccessful, and in the process Rosalyn sustained intensive injuries to her face. She lost the use of one eye and carries the scars still. Despite a broken leg, Rosalyn had decided to try (and likely drown) swimming for freedom. Drageda instead decided to set her free with a promise to never return.

She returned to Rusalka broken and begged Erzulie to let her leave. Both she and Caiaphas refused, so Rosalyn remained, but she maintained an obsessive distance from the cliffs and their shadow.

Quiet followed and they rebuilt. She and Erzulie made their mateship official and decided to have children, taking Firefly as their donor. A ways into their pregnancy, Caiaphas attacked Vectoringex and seemingly killed him. Rosalyn was furious over the inciting of further war and alarmed when Firefly chose to step up in the injured queen's stead. She moved to challenge him but instead stepped up alongside. This caused tension between herself and her wife and, when Erzulie confronted her, Rosalyn immediately stepped back down. She took the implication that Erzulie trusted Caiaphas more than herself deeply personally, and the gulf between them widened.

Firefly was furious with her abdication and confronted her. Rosalyn snapped and attacked him, then fled. When she returned, she was challenged by Vaati. In a fit of self destructive folly she fought him and lost. This fight, combined with the stress of the previous weeks, was too much for the children she carried.

She mended things with Erzulie and when her wife went into labor, she did as well. It was too early, but the dead children within her initiated prematurely. She lost four but one survived, a boy she named Reyes. The birthing was hard enough that she determined never to go through it again. She doesn't believe she'd survive it.

Firefly fled the pack that night and Caiaphas assisted them. Erzulie had four children; Nieve, Clementine, Scarab, and Marisol. Illidan stepped to the head of the pack in his absence and life continued.

As they grew, some of their children were lost to wandering. Fearing for Clementine, Rosalyn went after her to seek where she had gone, only intending to be gone a week or so. Instead she was waylaid when earthquakes struck, finding a near-dead Fennec and nursing her to health along the way. Eventually she made it back to the Sound, but the coast was destroyed and Rusalka had relocated.

She began a desperate search that ended when she finally found Nieve. Her daughter was the last of their children to remain, but she led her to Rusalka's new claim, where Erzulie waited.