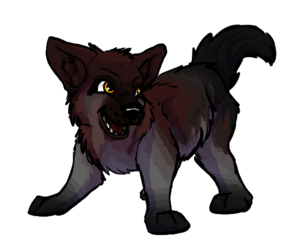 Tierra has a rough, reddish-hued coat that fades to a smoky grey as it reaches her underbelly and legs. Her tail and muzzle are both dark, as are the markings that line her rich golden eyes. She bears a passing resemblance to her sea-tossed father and, in turn, her paternal grandmother.

Tierra was born to Towhee in Redhawk Caldera alongside her siblings on March 27, 2021. From the start she was loud and her volume only got worse as she grew in both size and lung capacity. There weren't many things small Sapsucker liked more than insults, yelling, and any combination of the two. In time 'no' would become one of her favorite phrases.

Despite her more annoying traits, Tierra didn't become a problem(tm) until Reyes accidentally instinctually attacked Caracal. As a result, Towhee chased the man off, causing a devastated reaction in her daughter (who understood little of what was happening). Over time she became more and more convinced that her daddy had the right idea in leaving and, when things came to a head in a heated argument with Caracal, Tierra chose to run off. She did so with the intention of finding her dad and living with him, but in the end she only got herself lost.